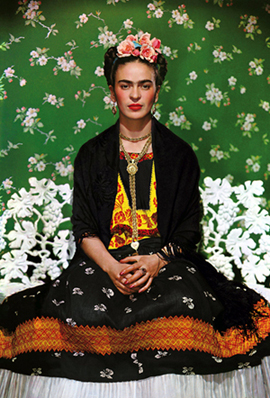 This might seem like an ignorant understatement; however, I kind of suspect that many people, like me, learnt of Frida Kahlo, the Mexican femal artist born in the early 20th century, from the movie "Frida".

Recently, Austria Bank Kunstforum in Vienna is holding a Frida Exhibit. Even though I didn't know much about her paintings, I joined several friends of mine for the exhibit, which was totally an eye opening experience!

Even after I watched the movie "Frida", until I went to this exhibit, I assumed that Frida was only famous because of her beauty and private life.

However, seeing her paintings in real life makes me realize how shallow my opinion was.

Her paintings are generally very powerful, with bright colors, almost over-the-top composition which brings out a taste of extravagance; however, what really is overwhelming are the emotions and sorrows hiding behind those colors. 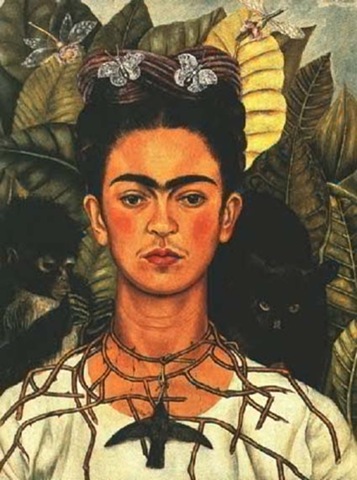 Never formally trained as an artist, Frida started painting excessively at 18 after she suffered from a life-threatening car accident which would eventually cause her lifelong pain and suffering to release her feelings and pass through the long lasting recuperation. Hence, a great artist was born.

Frida has a very distinct style. To her, painting is her way to express herself. Her paintings are, hence, coming from her personal experiences, which incoperate her life, viewpoints and feelings. Therefore, she also used a lot of symbols to tell the story. Taking the "Self-Portrait with Necklace of Thorns", the painting used as the poster for this exhibit, as an example, the necklace of thorns implies not only a Christian martyr but also the pains and sadness she bore. The hummingbird as the ornament of the necklace is a prayer for love, while the predatory black cat behind Frida symbolizes back luck and death that seemingly implies that the love of Frida herself has constently in danger.

And the love constently in danger had been one of the main sources causing her depression.

Throughout her life, Frida loved dearly, respected and yet was enormously tortured emotionally by her great lover of life, Diego Rivera. When their lives first collided, Diego had been a famous mural artist in Mexico, while Frida, 21 years of his junior, only started painting. Their love story stretched over decades, and they divorced once and remarried, with both of them encountering numerous affairs. However, regardless her affairs with different men and women, Frida had always held a tremendous amount of love for Diego and been tormented by his endless affairs, which inspired some of her most important artwork. The painting, "Diego on My Mind", is a classic example of showing her desire to possess him. In the painting, Diego, as imprinted on the forehead of Frida who is in a traditional dress that Diego adores, is surrounded and trapped in the roots tangled like spider web, and Frida carries sorrow in her eyes. It expresses Frida's pain caused by his affair and her desire to never share him with any other woman again. 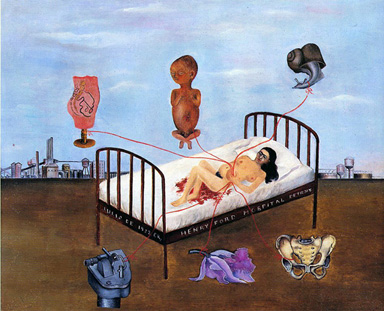 The car accident Frida suffered at teenage caused severe damage to her ovary and spine, making it hard for her to carry a baby. During her life, she endured several miscarriages and one abortion due to health condition. The miscarriage, abortion, along with Diego's endless affairs and her everlasting physical pain made her sink into depression from time to time. Her miscarriage at Henry Ford Hospital prompted her to paint the painting using the name of the hospital as title, in which Frida, lying on the hospital bed, bleeding from down below, is linked to a snail, a fetus, a female torso, a fractured pelvic, orchid and a machine. The snail implies the slow procedure of the miscarriage, the orchid symbolizes the female genital, the fetus is what she longs for, the female torso indicates the specific female organ affected, the fractured pelvic forms part of her and the cold machine represents all the medical apparatus at the hospital. All in all screams for a dream she held through her whole life that could never be granted. 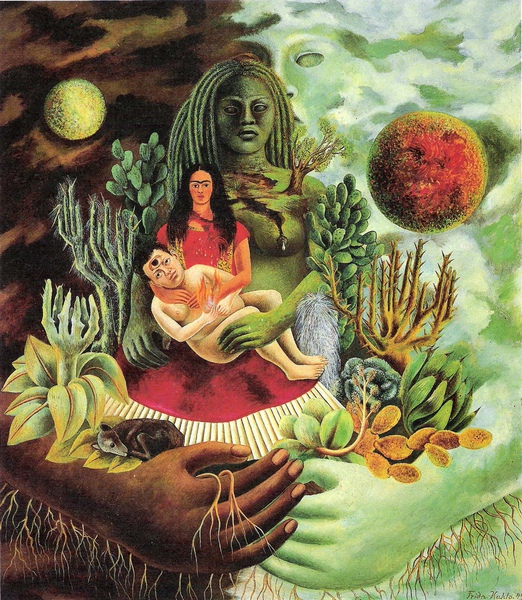 或許受到這樣的影響，在她的畫裡也經常以大地、母親、陰陽、日月的協調等概念為主題。整個展場中，我最喜歡的，也是這個以陰陽調和為主題的區塊。就像『宇宙、大地、我、迪高與Xolotl先生愛的擁抱』（The Love Embrace of the Universe, the Earth, Me, Diego and Mr. Xolotl）這幅畫裡，芙烈達擁抱著宛如嬰孩的迪高，他們同時被大地之母及宇宙層層懷抱著，在日月爭輝之下，黑狗Xolotl先生安靜地沈睡，他既是芙烈達的寵物，也代表阿茲提克神話中守衛黑暗界的狗頭人身Xolotl。儘管芙烈達的這些畫作傳達出她對和諧與完整的渴望，她的生活卻總是動盪得多，這些追求都只是她生命裡另一個未竟的嚮往。

Probably influenced by her personal life, Frida used the earther, mother, yin-and-yang, sun-and-moon harmony as the theme in many of her paintings. This section is actually Sunny's favorite part of the whole exhibition. In "The Love Embrace of the Universe, the Earth, Me, Diego and Mr. Xolot", Frida embraces the child-like Diego while they both are in the arms of Mother Earth and the Universe. Under the lights of the sun and the moon, Mr. Xolotl quietly sleeps. He is at the same time, Frida's pet, and also represents the guard of the underworld, Xolotl, in the Aztec mythology. Despite her yearning for a harmonious and complete life as expressed in her paintings, her life had been far from harmonious. All of it is just another life-long dream that never became true. 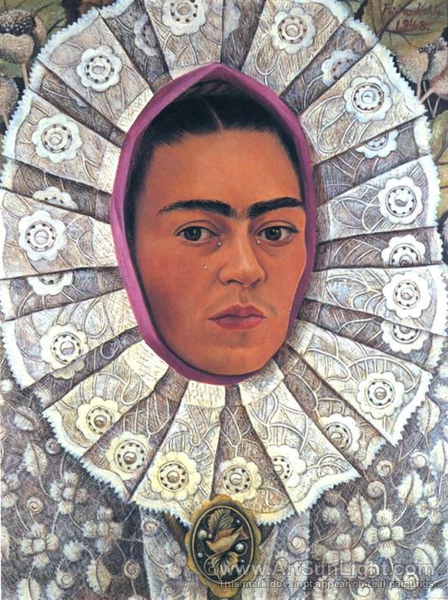 For her usual illustration of her internal world, Frida was quickly characterized as a "Surrealist", even though Frida herself dissed being categorized as such. To me, her paintings are a coalition between Symbolism, Expressionism and Surrealism. However, just like her fighting against confinement, her artwork is not meant to be defined.